In Tibet, the Sherpas’ call it Chomolungma.  In China it’s known as Zhumulangma.  In Nepal it is sometimes called Sagarmatha.  You know it as Mount Everest.

For many years I’ve been enamored of recantations of Everest summit attempts.  Maybe it’s my own personal affliction, but I often find many parallels between what we directly observe and experience in nature and the financial markets.  Nature teaches us lessons of cycles, fractal patterns, colony behavior, etc.  So much of what we observe in nature correlates with patterns of human decision making.  To the point, I’m seeing in the financial markets today a parallel with perhaps THE key juncture in the trek to the actual Everest summit.  Just what is this lesson and how can we apply this to investment decision making in the current cycle?

Like the financial markets, conditions on Everest can change quickly and with very little warning.  The key to survival is outcome anticipation and having a plan for decision making under all circumstances.

It happens that this year, diversified portfolios have not turned in the best of performances.  Although diversification is a bedrock construct in long term portfolio management, it has actually been a drag this year.  Anyone with exposure to the emerging markets is hurting.  Precious metals have been less than satisfactory, to say nothing of the broader commodity complex.  Many a foreign equity leaves a good bit to be desired.  Yes, the chanting over Europe bottoming is growing, but personally I believe it’s a false dawn.  And now it’s bonds that have run into a bit of trouble as an investment asset class.  Post the Bernanke speech in June, incessant Fed chatter was able to get stocks back up to new highs, but bonds remain to this day at or near their correction lows.  Global asset class performance has been increasingly narrowing as the year has progressed.  One asset class at a time has been falling by the wayside, very much like the topping process of an individual market.  This is the exact environment where the potential for capital to “concentrate” is very significant.  History teaches us that capital concentration heightens investment risk, very much as a concentration of climbers at the Hillary Step on Everest heightens personal survival risk.

In one sense, Mr. Bernanke has gotten his wish in spades.  If you want financial asset performance right now, there is only one game in town for the moment – equities.  As always this is neither good nor bad, but importantly what it sets up is concentration risk.  As money incrementally moves from asset classes that have turned down globally into US equities for short term performance reasons, the investment crowd is ever further “herding” into equities.

Concentration of capital in any asset class is not an immediate signal to sell or sign of a market peak in and of itself.  In fact, the process of capital concentration has precipitated some of the greatest asset price movements the investment world has ever seen.  Has it also been associated with asset class bubbles over time?  You bet.  Where investment survival becomes a crucial objective in a world of capital concentration is not on the way up to the market summit, but rather on the way down.  Where climbers on Everest run into serious life or death trouble is on the descent, when the Hillary Step is very crowded and the weather has changed for the worse.  On Everest, climbers are in radio communication with each other as one of the most important ongoing assessments broadcast is the number of climbers concentrated at the Hillary Step.  Investors are not in “radio communication” with each other, therefore it’s important that we acknowledge investment concentration risk when we see it and make sure we’ve thought out a game plan for decision making when weather conditions change in the financial markets.

How can we use the lessons of Everest, and the Hillary Step specifically, as we navigate the current market environment?  Personally, I believe it comes down to continual assessment of three key financial market character points – valuation, liquidity and trend.

Valuation awareness is absolutely key to long term investment success.  But valuation assessment is not a strict short term decision making tool.  Financial markets do not top or bottom at exact predetermined valuation levels, as every cycle is different.  It’s awareness of historical context that is important in terms of elevating risk management at any point in time, since equity market valuations are guideposts.  The chart below is over 120 years of S&P P/E multiple history using Robert Shiller’s CAPE (cyclically-adjusted P/E ratio – adjusted for total business cycles as opposed to conventional P/E’s focusing on one year’s data).  What the charts tells us is that we’ve currently entered historically high valuation territory. 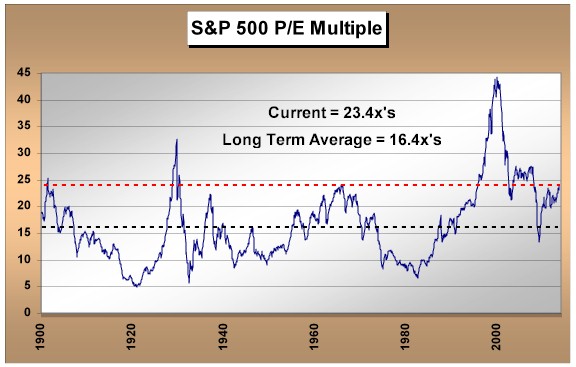 I believe it’s fair to say that as we look at a world where very few asset classes globally have produced positive nominal returns year-to-date, and a world where US corporate earnings and economic growth have been tepid at best, increasingly ascending US equity valuations connote incremental capital concentration.  The number of climbers congregating at the Hillary Step is growing.  For now, broad market perceptions are that we remain in the ascent phase in the current equity market cycle.  The signs of capital concentration tell us we need to start thinking about how we will execute a plan for the ultimate descent at perhaps a very crowded Hillary Step juncture somewhere in the future when shorter term weather conditions on the financial market mountain change.

Before moving ahead, one more quick character point regarding long term valuations and current market perceptions.  I’ve seen many a market pundit point to current market valuations as not being wildly excessive relative to historical context.  On face value, this is accurate.  But we need to remember that the average growth rate for US GDP in economic expansion cycles of the last six decades has been roughly 3 ½-4%.  In the current cycle we’re looking at 1 ½-2%.  In fact, ours is the first cycle in the official history of GDP data to not even once see a 4% GDP growth rate in any one quarter.  So the question naturally becomes, should “fair” or average equity valuations in a 1 ½-2% GDP growth world be the same as what has considered fair valuation for equities in a 3 ½-4% GDP growth world of the last 60 years?

None of the comments above suggests anything about market timing.  Rather, I hope they suggest context.  Main message being, the further we’ve moved away from appropriate fair valuation in any market cycle, the more susceptible we are to risk when shorter term “weather conditions” (liquidity and trend) change.

Although valuation metrics are key longer term guideposts, liquidity and trend importantly influence short term investor thinking and behavior.  In a world where heightened capital concentration is evident, we need to pay attention to these short term financial market variables.  I could spend hours on assessment of market trend, but this is very much the art as opposed to science.  Personally, technical analysis and gut feel are my tools of choice in market trend assessment.

For now, longer term equity market trend remains positive.  But like the weather on Everest, trend can change abruptly and with very little warning.  In a world of heightened capital concentration risk, increased focus on the character of trend is crucial.

Of course I have saved the issue of liquidity for last, for very obvious short term reasons.  I’m personally convinced that the Fed realizes they need to exit the QE (Quantitative Easing) program.  The issue now becomes how to accomplish this, and over what time frame, with the least amount of financial market disruption.  Liquidity related “weather conditions” on the financial market mountain are going to change (the one singular guarantee on Everest).  Yet although we know this, capital continues to concentrate in equities for now.

After immense preparation and xpense, the ultimate point of human frustration and mortal decision making for climbers on Everest is being several hundred feet from the summit and having the weather turn bad.  Does a climber acknowledge that survival risks have increased and turn back to descend the mountain, perhaps missing a once-in-a-lifetime chance to summit?  Or does the climber make the decision to push ahead and plan to accelerate the descent once the summit has been reached, essentially making the bet that they will stay ahead of changing weather and that there will be no time lost in a concentration of climbers all needing to traverse down the Hillary Step?  It all comes down to a personal assessment and implementation of risk management in decision making.

In the current cycle, we are well along our trek to the financial market summit.  Given the evidence of capital concentration we are seeing right now in equities, we know we are increasingly moving above the Hillary Step, which will again be confronted on our eventual descent at some point.  Off in the distance we can see initial signs that the short term weather condition of liquidity is set to change, although we cannot yet assess magnitude and timing of the change we know is to come.  We are not yet ready to call off the summit attempt and turn back in the current cycle, but we know risks are increasing.  Our attention should now be equally divided  between the specific risks and demands of summiting and the risks and demands of the ultimate descent.

When the Sherpa’s refer to Everest as Chomolungma, they are not simply describing the physical mountain.  Chomolungma also incorporates the idea of the “mountain god”.  Chomolungma is a reverential characterization.  Do investors in the current financial market have the same reverence for the market mountain and a solid game plan for decision making when financial market weather conditions change?  We need to think about and incorporate this set of current environmental variables into planning our ascent/descent well before our current summit attempt is over.  We need to elevate our focus on risk management.  We know heightened capital concentration risk in equities is growing.  Although market trend remains positive, the shorter term issue of market liquidity is now becoming a question mark in terms of Fed policy.  Although it can literally take a year to plan for and coordinate an Everest summit attempt, often it is success that can be measured in hours in the descent that determines survival.  The most successful climbers on Everest focus equally on the ascent as well as the descent, and even then there are no guarantees.  The same conceptual decision making constructs apply to us an investors.