Before taking even one step further, I’ll tell you right up front that this is more of a “for fun” discussion than not. For many a moon I have followed a number of sentiment surveys that I believe can be quite helpful. Not investor sentiment, although there are plenty of them, but rather the sentiment of folks who sit on the front lines of actual business operations, and most importantly corporate earnings. I am referring to CEO and CFO surveys.

If I had to pick just one, it would be the Conference Board CEO business confidence survey that unfortunately only hits the tape quarterly. Why? Let’s have a look at the following chart that is the long term history of the CEO Business Confidence survey. For good measure I’ve marked each official US recession since the inception of this survey. Can you see why it’s one of my favorites?

Although no one in this wonderful world is clairvoyant, inclusive of every central banker on planet Earth despite what you may have heard, the CEO’s having contributed to this survey over time have had an absolutely remarkable record of calling turns in the economy. And wildly enough, almost exactly on the money. Very important for us as investors given that the financial markets also anticipate. You can see looking at the chart that CEO business confidence bottomed in each US recessionary period prior to the end of the official recession itself – exactly as equities usually bottom and begin to rally prior to the economic bottom in each recession.

The experience in 2001 was a bit different, but you may remember years later that recession (although still “on the books”) was essentially revised away as there were no two down GDP quarters officially. Secondly the 2008-2009 experience was also a bit different. Although CEO confidence bottomed before 2009 even began, downside anticipation was a bit less than in prior cycles. Personally I attribute this to the fact that a credit cycle implosion dragged the economy down with it, not the other way around as is usually the case in “normal” economic cycles. Nonetheless, CEO confidence bottomed well before equities in that 2008-2009 cycle. Had we “listened” to the CEO’s, we would have known the 2009 equity bottom was a buy.

What’s one lesson here? Moves below 40 on the CEO business confidence survey have in the past signaled a near term official recessionary outcome. There are no exceptions to this over the history of the survey. Secondly, the confidence survey has bottomed in each economic cycle at 35 or below. The key is to wait for a reversal off the bottom before diving into the deep end of the US equity buying pool. The move in the survey back above 40 after a 35 or lower bottom in each cycle has been achieved could be considered a prudent trading tool amongst the greater analytical toolbox of life. Again, 2001 is a bit of an exception probably due to the 9/11 event.

It turns out that trying to predict meaningful equity market and real economy contractions using the CEO business confidence data is a bit trickier, but maybe not impossible. Have a look at the following chart I’ve marked up more than a good bit. 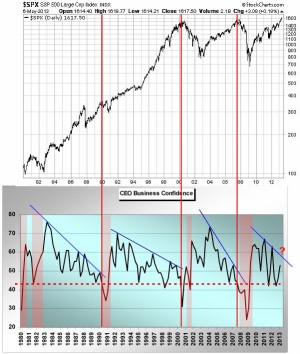 Let me explain. It’s not hard to understand that out of the depths of each official US recession, CEO business confidence has rocketed higher into the beginning of each economic expansion. The worst is over. Better days lie ahead. For investors as well as corporate exec’s, it’s a much happier time than what has already played out over the recent past. And in many cases we see CEO confidence run to or near all-time highs for the next economic expansion cycle early on in the cycle. Usually a year or so into the expansion cycle sees the pinnacle of CEO confidence for the entire cycle. From there on out CEOs have remained positive on the economy (above 50), but rhythmically less so as each cycle ages. In fact what is a more than apparent pattern in each economic expansion cycle is a series of “lower highs” for CEO confidence itself, ultimately leading to the next business cycle contraction. I’ve marked these clearly with the descending blue lines in each cycle.

Although we have a whopping three data points/patterns of historical experience when trying to anticipate the downside using this survey, each cycle iteration was extremely similar. As each economic/market cycle was nearing its conclusion, the prescient CEOs became a good bit more gloomy. In each cycle we saw a move to the approximate 42-43 level (the red dotted line), one last spike up in confidence that went no higher than the 50-55 range, and then the final move below 40 that signaled the expansion was over. As investors, we need to realize that these were important topping periods for equities.

Why am I bringing all of this up now? We’ve already had our move to the 42ish range for this cycle. We’ve put in the series of declining highs. In fact the most recent dip to 42 was the second time the survey hit the low 40’s in this cycle (once in 2011 and once in 2012). Are we getting a “double” due to unprecedented QE? We’re cycling back up right now based on the most recent survey numbers (1Q 2013). So, IF historical patterns and their implications for both the real economy and financial markets hold true, we need to watch these numbers like a hawk ahead. If we can break the series of declining highs to the upside, the CEOs will be telling us this already extended cycle extends further. But on the chance we see CEO confidence break back down and potentially arrive at 40 or below, I would personally consider it a very serious warning, unprecedented central banker actions or otherwise.

We’re not there yet and may never be, for all I know. The unfortunate part of the equation is that we will not again see these CEO confidence survey results until July. To be honest I believe the length between cycle results actually heightens their meaning. I told you at the outset this would be a bit of a for what it’s worth discussion. Nothing actionable right here and right now in terms of trying to make a macro call. Rather, I’m just trying to anticipate the relatively consistent rhythm of human behavior as we move into the summer months. I know real fundamentals and earnings trends have “meant less” to investors so far in 2013 relative to what has been the meaningful impact of the weight and movement of global capital. We’ve been here before. And of course the one absolute guarantee of the financial markets? Everything changes. Count on it.