You may have noticed that recently released NYSE margin debt data showed us a month over month decline.  Taken as a singular data point, pretty darn meaningless.  But set against the context of QE III and the current 2009 equity market cycle to date, its worthy of at least recognition and discussion.  Why?  In prior cycles, the time to have been very careful regarding equities has been when margin debt achieved a momentum peak and subsequent reversal.  Historically this been “the” momentum peak sign coinciding with a least a near term equity market peak of meaning.  Will the experience of prior cycles be so again in the current environment?  I wish I knew the correct answer, but for now I’m hoping asking the right questions provides us a watch point.

To put things into visual perspective, have a peek at the following chart.  You can see in the bottom clip exactly what I’m talking about in the current cycle.  The 12 month rate of change in margin debt was only higher in this cycle in 2010.  Moreover, as you look at the longer term history and rate of change rhythm of margin debt outstanding, it’s really only the highly speculative margin debt peaks of late 1999/early 2000 and 2007 that experienced higher rate of change numbers.  As you know, each of these occurrences was ultimately followed by chopping equity values in aggregate in half. 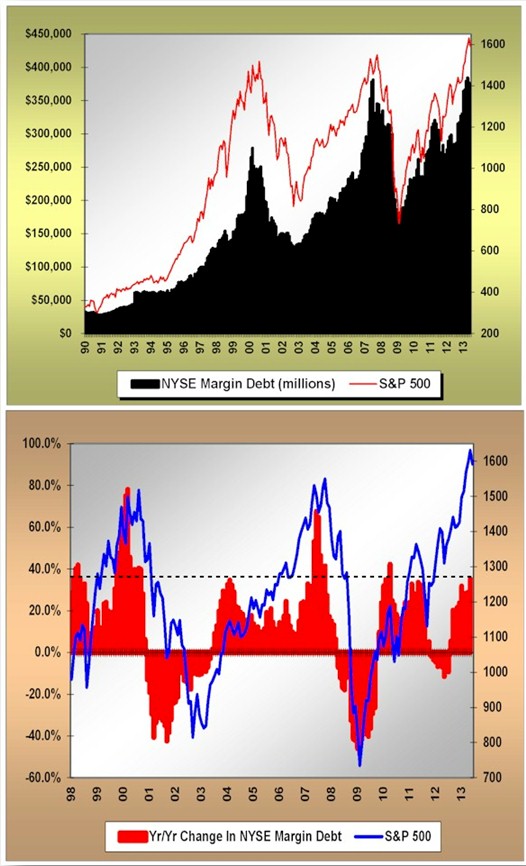 Prior occurrences in April of 2007 and February of 2004 saw the S&P lose 2% three months subsequent.

Whether we’ve seen the peak in margin debt or peak rate of change is still a question that will only be answered by tomorrow’s data.  But I think it is safe to say that we’re in rarified air right here.  If the character of margin debt expansion is not the embodiment of “animal spirits”, if you will, then what is?  The exact animal spirits Mr. Bernanke has been trying so hard to evoke with subsequent iterations of QE.

One more comment.  Let’s look at the history of margin debt outstanding relative to the total value of the equity market.  Now this does not look too bad, right?  We’re nowhere even near historical high water marks.  Unfortunately when it comes to changing margin debt levels and how they impact financial markets it’s a case of “Bernanke’s Dilemma” – stock versus flow.  From my perspective, it’s all about the rate of change in margin debt outstanding, the character of the flow, not absolute nominal dollar margin debt outstanding itself.  Flow impacts the forward rhythm of markets.  Given the behavior of the macro financial markets lately, they seem to have exactly the same flow versus stock perception regarding QE. 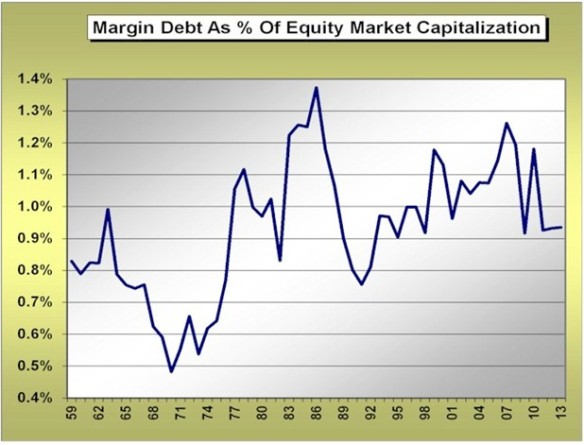 For now, we have a few margin debt data points of interest.  We’ve hit rate of change rarified air for margin debt in the current cycle.  For now we’ve hit a nominal dollar margin debt high for the current cycle followed by an initial reversal.  Both historical character points worthy of investor attention.  Is it just a pause prior to ever higher levels of margin debt outstanding being achieved?  Or does this mark a nominal dollar and rate of change demarcation line of potential increased price volatility for equities given the character of margin debt “animal spirits” already expressed?  Stay tuned, but be aware that rhythm and pacing of the current 2009 to present cycle is speaking about the potential for a bumpy summer.